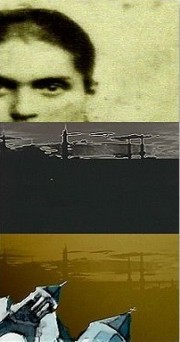 “Jagadakeer” is an Armenian term meaning fate, destiny or, literally, “what is written on the forehead.” Filmmaker Tina Bastijian’s fate was to find in film a space in which to explore issues of memory, erasure, nostalgia, absence and reconnection, using the Armenian genocide as point of departure. A collage of stylized tableaus, found footage and home movies, this personal meditation is not just about her grandmother, great-aunts or the Turks; it is the filmmaker's attempt to articulate 'the catastrophe' into film language--to position the real and the imagined, the heard and unheard, the longed-for and the denied.
JAGADAKEER ... between the near & east

" In Jagadakeer...between the near & east, we hear many sounds--a film projector, traffic, circadas, static. Early in the film, an image of hands opening a pomegranate is synched to the sound of an old-fashioned flash bulb popping... There is also the sound of impedance feedback ... The sound documents memory's mediators (photo, film, radio), reminding us that memory is constantly made and unmade by mediation."